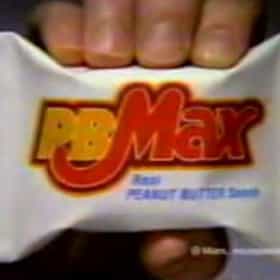 PB Max was a candy bar made in the United States by Mars Inc. It was first created and produced in 1989. They consisted of creamy peanut butter on top of a square-shaped whole grain cookie, enrobed in milk chocolate and cookie crumbles. The PB Max was initially created by Mars to compete with the peanut butter candy market, namely Reese’s Peanut Butter Cups. They were sold in single bar form or in boxes of 6 bars. Unfortunately the PB Max’s life span would be short lived. Despite favorable reception and high sales, the PB Max was discontinued sometime in the early to mid 90’s. According to former Mars executive Alfred Poe, PB Max was discontinued due to “the Mars family's distaste for ... more on Wikipedia