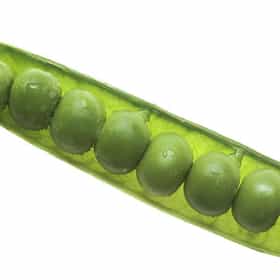 The pea is most commonly the small spherical seed or the seed-pod of the pod fruit Pisum sativum. Each pod contains several peas. Pea pods are botanically fruit, since they contain seeds and developed from the ovary of a flower. The name is also used to describe other edible seeds from the Fabaceae such as the pigeon pea, the cowpea, and the seeds from several species of Lathyrus. P. sativum is an annual plant, with a life cycle of one year. It is a cool season crop grown in many parts of the world; planting can take place from winter to early summer depending on location. The average pea weighs between 0.1 and 0.36 grams. The immature peas are used as a vegetable, fresh, frozen or ... more on Wikipedia

#8 of 52 The Vegetables Nobody Wants to Eat 158.9k VOTES Broccoli, cauliflower, Brussels sprouts. The world’s plates are littered with the gross vegetables we refuse to eat. Everyon...
#31 of 44 The Best Survival Foods 5k VOTES List of the best survival foods, as ranked by doomsday preppers and food lovers. A catastrophic emergency can happen at any ...
#16 of 39 The Best Things To Put in Mac and Cheese 2.8k VOTES List of things to put in mac and cheese, as ranked by chefs, cooks, and food lovers. Macaroni and cheese is one of the most ...
#30 of 40 The Best Foods for Runners 660 VOTES List of the best foods for runners, as ranked by running enthusiasts. As people who enjoy running and do so regularly know, ...
#23 of 30 The Best Food Pairings For Chardonnay, Ranked 163 VOTES Wondering what foods to eat with Chardonnay? Here is a list of the best food and wine pairings for Chardonnay, which include...