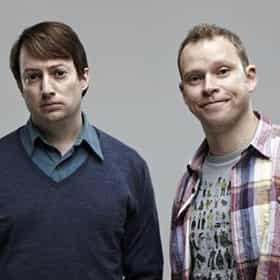 Peep Show is a British sitcom starring David Mitchell and Robert Webb. The television programme is written by Jesse Armstrong and Sam Bain, with additional material by Mitchell and Webb, amongst others. It has been broadcast on Channel 4 since 2003. In 2010 it became the longest-running comedy in Channel 4 history. Stylistically, the show uses point of view shots with the thoughts of main characters Mark and Jeremy audible as voice-overs. Peep Show follows the lives of two men from their twenties to thirties. Mark Corrigan, who has steady employment for most of the series, and Jeremy "Jez" Usbourne, an unemployed would-be musician, are the main characters of the show. The ... more on Wikipedia

Peep Show is ranked on...