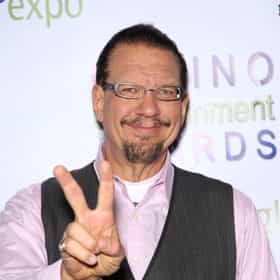 Penn Fraser Jillette (born March 5, 1955) is an American magician, actor, musician, inventor, television personality, and best-selling author best known for his work with fellow magician Teller as half of the team Penn & Teller. The duo have been featured in numerous stage and television shows such as Penn & Teller: Fool Us, and Penn & Teller: Bullshit!, and are currently headlining in Las Vegas at The Rio. Jillette serves as the act's orator and raconteur. He has published eight books, including the New York Times Bestseller, God, No!: Signs You May Already Be an Atheist and Other Magical Tales. He is also known for his advocacy of atheism, scientific skepticism, the First ... more on Wikipedia

Penn Jillette is ranked on...

#37 of 52 The Game Show Hosts With The Most 6.3k VOTES If you're a fan of quiz shows like Jeopardy, then you probably already know how important a great game show hosts are to the...
#2 of 92 People who voted for Penn Jillette... also upvote X-Men Franchise on The Best Marvel Comics Movies are 7x more likely to vote for Harry Houdini on this list The Greatest Famous Magicians 74.1k VOTES The most famous magicians in the world are known for performing amazing magic tricks, stunning illusions, and starring in me...
Famous Tall Men Over 6'2 454.2k VIEWS Some of the tallest men in Hollywood may not seem so on your screen. Paired alongside other tall actors, shorts actors weari...
#34 of 172 Dreamcasting Celebrities We Want To See On The Masked Singer 7.6k VOTES The US version of The Masked Singer has taken social media by storm and no wonder. With secret, costumed celebrities and clu...
30 Celebrities Who Hold Patents 139.3k VIEWS Most people think that only scientists, zany inventors, and large corporations hold patents, but many there are many celebri...
Celebrities Who Live in Las Vegas 9.3k VIEWS This list includes information about celebrities who live in Las Vegas, loosely ranked by popularity. Celebrities that live ...
35 of the Most Famous ENTJs 69k VIEWS Several famous actors, actresses, and politicians are believed to be ENTJs (Extraverted Intuitive Thinking Judging). ENTJs a...

Penn Jillette is also found on...