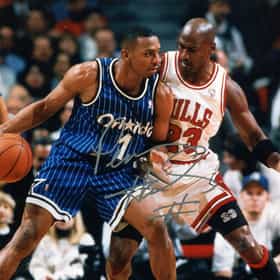 Anfernee Deon "Penny" Hardaway (born July 18, 1971) is an American college basketball coach for the Memphis Tigers and a former professional player. Hardaway played in the National Basketball Association (NBA), where as an exceptionally tall point guard, he was an NBA All-Star in his first few seasons. Hardaway was most productive in his years with the Orlando Magic, and his early years with the Phoenix Suns. Injuries began to plague him and diminish his effectiveness. He played for the New York Knicks from 2004 to 2006, and finished his career in 2007 with the Miami Heat, which reunited him with former Magic teammate Shaquille O’Neal. ... more on Wikipedia

Penny Hardaway is ranked on...

Penny Hardaway is also found on...