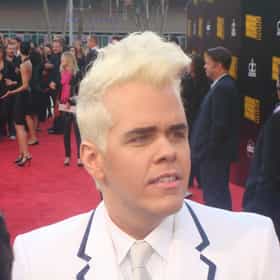 Mario Armando Lavandeira Jr. (born March 23, 1978), known professionally as Perez Hilton is an American blogger, columnist, and media personality. His blog, PerezHilton.com (formerly PageSixSixSix.com), is known for posts covering gossip items about celebrities. He is also known for posting tabloid photographs over which he has added his own captions or "doodles". His blog has garnered controversy for its attitude, its former outing of alleged closeted celebrities, and its role in the increasing coverage of celebrities in all forms of media. In addition to his blogging, Hilton has written three books, hosts a podcast with Chris Booker, runs two YouTube channels, and has acted ... more on Wikipedia

Perez Hilton is ranked on...

#138 of 161 These Big-Name Celebs Have Been Hiding Their Real Names 99.8k VOTES List of real names of celebrities, including actors, singers, wrestlers, and even politicians. Many actors and actresses use...
#16 of 16 The Best Worst Cooks In America Winners, Ranked 1k VOTES Which Worst Cooks In America winner made the most improvement? The show's recruits go through a culinary boot camp, learning...
LGBTQ+ Celebrities Who Have Been Homophobic 16.7k VIEWS   Homophobic celebrities who are gay is an oxymoron you probably didn't think was possible. But self-loathing and inf...
Celebrity Scandals 2010: Celebrity Scandal List for 2010 380.1k VIEWS Full list of all 2010 celebrity scandals. 2010 has been a year for celebrity scandal so far, and this list will be updated a...
26 Famous Gay People Who Fight for Human Rights 160.8k VIEWS Several gay celebrities fight for causes that benefit human rights all over the world. Some famous gay people support causes...
50+ Famous Juniors 112.7k VIEWS This list of famous juniors has been loosely ranked by fame and popularity. Several famous actors, musicians, and athletes a...
Crazy Celebrity Party Themes You Won't Believe 10.1k VIEWS If you had an unimaginable amount of money, would you use it to throw lavish, ridiculous theme parties? That seems to be the...
Celebrity Babies Who Were Born in 2015 44.7k VIEWS Another year, another crop if super adorable celebrity kids! This list includes all of the celebrity babies born in 2015. Sa...

Perez Hilton is also found on...