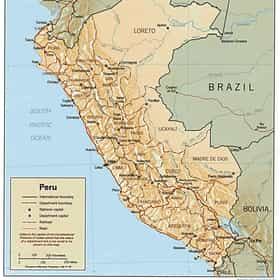 Peru, officially the Republic of Peru, is a country in western South America. It is bordered in the north by Ecuador and Colombia, in the east by Brazil, in the southeast by Bolivia, in the south by Chile, and in the west by the Pacific Ocean. Peru is an extremely biodiverse country with habitats ranging from the arid plains of the Pacific coastal region in the west to the peaks of the Andes mountains vertically extending from the north to the southeast of the country to the tropical Amazon Basin rainforest in the east with the Amazon river. Peruvian territory was home to ancient cultures spanning from the Norte Chico civilization in Caral, one of the oldest in the world, to the Inca ... more on Wikipedia

Shortly After A Meteorite Landed In Peru, Residents Began Suffering From A Mysterious Illness 15.8k views Though humans desperately want to better understand outer space, some celestial objects are better left to the vacuum of the...
The Best Soccer Players from Peru 7.3k votes Ever wonder who are the best soccer players from Peru? Whether you're curious or have want to help determine just which play...
The Best Tennis Players from Peru 135 votes List of the best tennis players from Peru, listed by popularity with photos of the players when available. Peru has produced...

Peru is ranked on...

Peru is also found on...