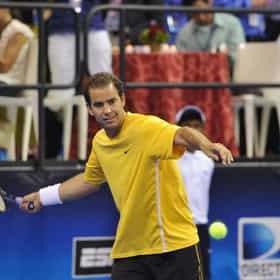 Pete Sampras (born August 12, 1971) is an American former professional tennis player. A right-handed player with a single-handed backhand, his precise and powerful serve earned him the nickname "Pistol Pete". His professional career began in 1988 and ended at the 2002 US Open, which he won, defeating rival Andre Agassi in the final. Sampras held the all-time record of seven Wimbledon Men's Singles titles with William Renshaw until 2017 when Roger Federer won his 8th title. Sampras also won five US Open titles, a joint Open-era record shared by Roger Federer and Jimmy Connors, and two Australian Open titles. His 14 Grand Slam titles were a record, surpassed when Federer won ... more on Wikipedia

Pete Sampras is ranked on...

#292 of 770 American Public Figures Who Are National Treasures 226.4k VOTES America's national treasures work in different fields, are of different generations, and all have different stories to ...
#121 of 179 The Smartest Professional Athletes 35.2k VOTES The smartest professional athletes include Rhodes Scholars, 1580 SAT scorers, and Ivy League standouts whose book smarts and...
#1 of 41 The Best Men's Tennis Serves of All Time 8.8k VOTES A crucial element to developing a dominant all-around tennis game is unquestionably having a powerful serve. This list consi...
#2 of 89 People who voted for Pete Sampras... also upvote Star Trek Franchise on The Greatest Sci-Fi Movies of All Time also upvote The Godfather Franchise on The Best Movies of All Time The Greatest Male Tennis Players of the Open Era 27.6k VOTES This list of the greatest male tennis players of the Open Era includes some of the most iconic names in men's tennis. Who ar...
Here's a List of Every Known Republican Celebrity 1.8M VIEWS Conservative celebrities - this list of Republican celebrities has over 400 celebrities who are Republicans. What celebritie...
#5 of 57 The Best Men's Tennis Players of the 2000s 2.2k VOTES List of the best men's tennis players from 2000s, listed by popularity with photos of the players when available. From 2000 ...
100+ Celebrities in Got Milk Ads 42.5k VIEWS Got Milk was an advertising campaign created for the California Milk Processor Board in 1993, that encouraged people to drin...
Athletes Who Have Appeared On Wheaties Boxes 58.1k VIEWS Wheaties boxes have been featuring famous athletes since 1934, and the cereal has helped many pro sports figures become hous...
Famous People Of Greek Descent 376k VIEWS This list of famous people of Greek descent is loosely ranked by fame and popularity. Many famous people are of Greek descen...
#1 of 75 The Best Tennis Players from the United States 26.8k VOTES This is a list of the best tennis players from United States, ranked by popularity, with photos of the players when availabl...

Pete Sampras is also found on...