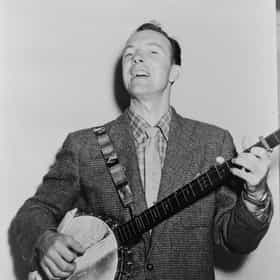 Peter Seeger (May 3, 1919 – January 27, 2014) was an American folk singer and social activist. A fixture on nationwide radio in the 1940s, he also had a string of hit records during the early 1950s as a member of the Weavers, most notably their recording of Lead Belly's "Goodnight, Irene", which topped the charts for 13 weeks in 1950. Members of the Weavers were blacklisted during the McCarthy Era. In the 1960s, Seeger re-emerged on the public scene as a prominent singer of protest music in support of international disarmament, civil rights, counterculture, and environmental causes. A prolific songwriter, his best-known songs include "Where Have All the Flowers ... more on Wikipedia

The Best Pete Seeger Albums of All Time 25 votes Pete Seeger is widely considered one of the best folk singers of all time, with a long and prolific career starting back in ...

Pete Seeger is ranked on...

#537 of 1,057 The Best Singers of All Time 2.2M VOTES Who are the best singers of all time? That's a tough question to ask. This list includes many of the greatest, most famous v...
#255 of 351 The Greatest Entertainers of All Time 121.6k VOTES When it comes to the greatest entertainers of all time, we're truly blessed to live in an age where technology allows u...
#37 of 139 The Most Undeserving Members of the Rock Hall of Fame 407.6k VOTES The most undeserving members of the Rock Hall of Fame are all respectable and successful musicians and bands but quite simpl...
#196 of 278 Rank the Rock N Roll Hall of Fame Inductees 306.2k VOTES A complete list of bands and artists inducted into the Rock and Roll Hall of Fame, ranked in order of preference by music fa...
#243 of 519 Which Artist Would You Bring Back From The Dead To Write One More Song? 123.6k VOTES Many of the world's greatest musicians remain highly respected even in death. The world often mourns the loss of t...
#26 of 100 The Greatest Banjo Players of All Time 13.2k VOTES Who are the best musicians to have ever played the banjo? The banjo is a four or five string instrument. Early versions of t...
#31 of 185 Celebrity Death Pool 2014 31.5k VOTES Celebrity death pool 2014: Here's a complete list of celebrities who just might die in 2014. Every year we lose more and mor...
Famous Tall Men Over 6'2 448.3k VIEWS Some of the tallest men in Hollywood may not seem so on your screen. Paired alongside other tall actors, shorts actors weari...
Celebrities Who Died in 2014 2.2M VIEWS This list of celebrity deaths in 2014 is an official watch list of celebrities who died in 2014. Which famous celebrities di...
Famous Banjo Players 218.3k VIEWS Famous Banjo Players, with photos, is a list of the best known banjo musicians in the world. These are musicians who are mas...
#14 of 131 The Best Pop Folk Artists of All Time 54.3k VOTES Beginning in the 1960s, the genre known as folk pop emerged as folk music grew in popularity. While the earliest folk singer...
Kids of Dead Musicians: How Are They Doing Today? 726.2k VIEWS Music can transform the soul and the musicians who write, produce, sing, and play our favorite songs can feel like a best ...
Famous People Living With Lyme Disease 257.5k VIEWS Lyme disease is a debilitating illness that impact the central nervous and respiratory systems. Several famous actors, athle...

Pete Seeger is also found on...