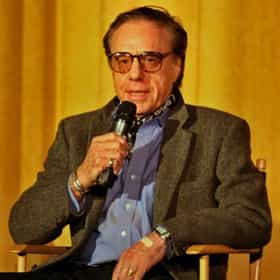 Peter Bogdanovich is ranked on...

#59 of 122 The Best Comedy Directors in Film History 14.4k VOTES Titans of comedy! These kings of clowning are the best comedy directors ever to make side-splitting movies. This list includ...
#127 of 783 People who voted for Peter Bogdanovich... also upvote Star Trek Franchise on The Best Movies Based on TV Shows also upvote Harry Potter Franchise on The Best Movies of All Time The Greatest Directors In Movie History 305.1k VOTES List of the greatest directors in movie history, who are most deserving of Academy Awards and critical recognition. The list...
#35 of 50 The Greatest Artists With Only One Masterpiece 6.2k VOTES The greatest artists with only one masterpiece include authors, actors and actresses, directors, painters and musicians. Eac...
Famous People Named Peter 83.7k VIEWS List of famous people named Peter & Pete, along with photos. How many celebrities named Peter can you think of? The famo...
Famous Vegetarians and Vegans 19.9k VIEWS Vegetarian celebrities, famous vegans, vegan celebrities and famous people who are eating vegetarian. You'd be surprised who...

Peter Bogdanovich is also found on...