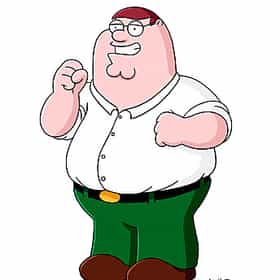 Peter Griffin is the main character of the American animated sitcom Family Guy. He is voiced by cartoonist Seth MacFarlane and first appeared on television, along with the rest of the family, in the 15-minute short on December 20, 1998. Peter was created and designed by MacFarlane himself. MacFarlane was asked to pitch a pilot to the Fox Broadcasting Company based on Larry & Steve, a short made by MacFarlane which featured a middle-aged character named Larry and an intellectual dog, Steve. After the pilot was given the green light, The Griffin family appeared on the episode "Death Has a Shadow". Peter is married to Lois Griffin and is the father of Meg, Chris, and Stewie. ... more on Wikipedia

Peter Griffin is ranked on...