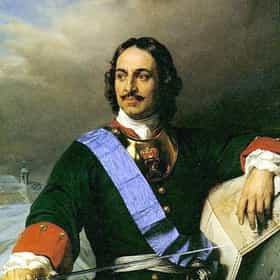 Peter the Great (Russian: Пётр Вели́кий, tr. Pyotr Velikiy, IPA: [ˈpʲɵtr vʲɪˈlʲikʲɪj]), Peter I (Russian: Пётр I, tr. Pyotr I, IPA: [ˈpʲɵtr ˈpʲɛrvɨj]) or Peter Alexeyevich (Russian: Пётр Алексе́евич, IPA: [ˈpʲɵtr ɐlʲɪˈksʲejɪvʲɪtɕ]; 9 June [O.S. 30 May] 1672 – 8 February [O.S. 28 January] 1725) ruled the Tsardom of Russia and later the Russian Empire from 7 May [O.S. 27 April] 1682 until his death in 1725, jointly ruling before 1696 with his elder half-brother, Ivan V. Through a number of successful wars, he expanded the Tsardom into a much larger empire that became a major European power and also laid the groundwork for the Russian navy after capturing ports at Azov and the Baltic Sea. ... more on Wikipedia

Peter the Great is ranked on...

#75 of 2,830 People who voted for Peter the Great... People on the West Coast are 2x more likely to vote for this The Most Influential People of All Time 2.4M VOTES This is a list of the most influential people of all of human history. This means that the individuals on this list have had...
#19 of 377 The Most Important Leaders In World History 947.4k VOTES For good or for bad, our leaders can be powerful forces for change in the world. But who are the most impaction people to ev...
#575 of 1,472 The Greatest Minds of All Time 739.9k VOTES List of the Greatest Minds of All Time, throughout history. This list represents the most influential thinkers across variou...
#17 of 91 People who voted for Peter the Great... also upvote Star Trek Franchise on The Best Space Movies are 8x more likely to vote for Elizabeth I of England on this list The Most Enlightened Leaders in World History 43.7k VOTES Enlightened leadership takes on many forms. Sometimes, especially in the ancient world, it was the codifying of laws and pre...
Unhappily Ever After: The Most Destructive And Abusive Royal Marriages In History 355k VIEWS The worst royal marriages in history also happen to be some of the most bloody, heartbreaking, and shocking. From royal cous...
Famous People Named Peter 83.7k VIEWS List of famous people named Peter & Pete, along with photos. How many celebrities named Peter can you think of? The famo...
The Different Physical Sizes Of Historical Rulers 4.4k VIEWS How tall were leaders in the past? As in the 21st century, historical famous leaders' height varied considerably, as did def...
Here's What Famous Historical Figures Really Looked Like 55.6k VIEWS Records of kings, emperors, saints and other famous historical figures are often obscured by bias, idealization, and apotheo...
16 World Leaders Who Were (Or Are) Tall AF 50.5k VIEWS Power and height have been associated for a long time. For centuries, members of the British monarchy tied their height to t...

Peter the Great is also found on...