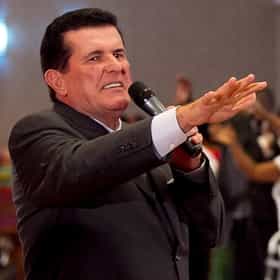 Peter Popoff (born July 2, 1946) is a German-born con man who poses as a televangelist. He was exposed in 1986 for using an earpiece to receive radio messages from his wife, who gave him the names, addresses and ailments of audience members during Popoff-led religious services. Popoff falsely claimed God revealed this information to him so that Popoff could cure them by faith healing.He went bankrupt the next year, but made a comeback in the late 1990s. Beginning in the mid-2000s, Popoff bought TV time to promote "Miracle Spring Water" on late-night infomercials, and referred to himself as a prophet. Business Insider remarked, "No matter how many times his claims are ... more on Wikipedia

Peter Popoff is also found on...