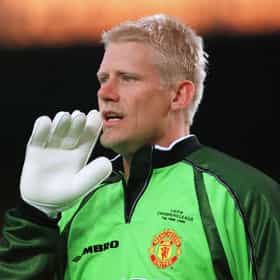 Peter Bolesław Schmeichel, MBE (Danish pronunciation: [pʰetɐ ˈsmaɪ̯ˀkl̩]; born 18 November 1963) is a Danish former professional footballer who played as a goalkeeper, and was voted the IFFHS World's Best Goalkeeper in 1992 and 1993. He is best remembered for his most successful years at English club Manchester United, whom he captained to victory in the 1999 UEFA Champions League Final to complete the Treble, and for winning UEFA Euro 1992 with Denmark. Born in Gladsaxe, Copenhagen, Schmeichel was famous for his intimidating physique (at 1.91 m (6 ft 3 in) tall and weighing close to 100 kg (15 st 10 lb) during his playing days), and wore specially made size XXXL football shirts. A ... more on Wikipedia

Peter Schmeichel is ranked on...

#13 of 208 The Best Soccer Players of the '90s 141.3k VOTES Who are the best soccer players of the ‘90s? Soccer is an beloved world sport with international stars such as Ronaldo, Zine...
#2 of 228 People who voted for Peter Schmeichel... also upvote Diane Kruger on The Most Beautiful Models in the World also upvote Toni Garrn on The Most Beautiful Models in the World The Best Soccer Goalies of All Time 110.8k VOTES Strikers much of the glory, but the foundation of many soccer teams is built on the strength of having an outstanding goalke...
#5 of 124 Best Manchester United Players of All Time, Ranked 140.1k VOTES Whenever you think of soccer, the first team that's likely to come to mind is Manchester United. The club is by far and away...
#48 of 171 The Best Polish Soccer Players & Footballers Ever, Ranked 18.7k VOTES Which of the best Polish soccer players of all time would you pick for your fantasy Poland national team draft? You would ha...
Famous People Named Peter 84.2k VIEWS List of famous people named Peter & Pete, along with photos. How many celebrities named Peter can you think of? The famo...

Peter Schmeichel is also found on...