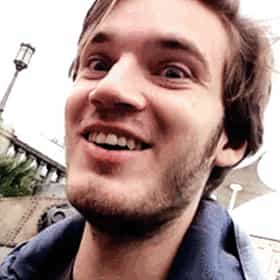 Felix Arvid Ulf Kjellberg, better known by his online alias PewDiePie, is a Swedish producer of Let's Play videos on YouTube. Since 15 August 2013, PewDiePie's channel has been the most subscribed channel on YouTube, being surpassed briefly in November and December 2013 by YouTube's Spotlight channel. Holding the position since 22 December 2013, the channel has reached over 34.8 million subscribers, as of February 2015. On 19 July 2014, the channel surpassed RihannaVEVO to become the most viewed channel of all time. Currently, the PewDiePie channel has received over 8 billion video views. Due to his popularity, PewDiePie's coverage of indie games has created an Oprah effect wherein ... more on Wikipedia

PewDiePie is ranked on...

#354 of 529 Things That Are Not As Cool As People Think They Are 1.1M VOTES Jorts are the dumbest things I've ever seen. Next to Toms shoes. Next to the Toyota Prius. Next to d-bags taking pictures of...
#28 of 51 Celebrities You're Sick Of In 2020 2.9k VOTES Who are the most annoying celebrities of 2020? It's a new decade, and ain't nobody got time for obnoxious celebrities. ...
#1 of 146 The Best Gaming Channels on Youtube 80.5k VOTES Here are the best gaming channels on YouTube, as voted by fans. Let's Play videos and comedy sketches are just a few of...
#63 of 91 People You Want South Park to Make Fun of 53.1k VOTES Which celebrity do you want to see made fun of by Trey and Matt on South Park? The show does a truly incredible job of ...
#8 of 28 The Worst Falls From Grace Of 2017 28.5k VOTES Ah, 2017: another year, another crop of celebrities who screwed up and ruined what was left of their reputations. For some r...
#29 of 31 YouTubers Showing Off Their Ridiculous Mansions 296 VOTES Did you know that several YouTubers have bought giant houses off of their earnings? While some of that revenue comes fr...
#9 of 93 The Greatest Vloggers of All Time 42.7k VOTES Here are the best YouTube vloggers aka video bloggers. What's a vlogger? Well, anyone with a YouTube channel has the ch...
#18 of 19 The YouTuber Hall Of Shame 104.9k VOTES Let's be honest: there are a lot of terrible people on YouTube. When you give the masses an online platform from which ...
#1 of 129 The Best YouTube Entertainment Channels, Ranked 10.9k VOTES  Entertainment videos offer hours of viewing pleasure from a variety of popular uploaders, like famous comedians and Yo...
#1 of 20 Famous YouTubers Who Are Scorpios 220 VOTES On this list you’ll see Scorpio YouTubers, ranked by popularity. This list of famous Scorpio YouTubers - born between Octobe...
#6 of 26 The Best Comedy Channels on Youtube 10.7k VOTES A ranked list of the best comedy channels on YouTube, as voted on by fans of the channels themselves. Improv, stand-up, sket...
#19 of 61 The Best 'Fortnite' YouTubers 329k VOTES Here are the best Fortnite YouTube channels to subscribe to for games, spectators, and fans. If you're looking for...
70+ Celebrities Who Have Almost Died 1.7M VIEWS Every day, people all over the world we never hear about are involved in incidents that could easily be fatal. The ones we d...
These People Became Internet Famous For The Wrong Reasons 17.2k VIEWS Not all fame is positive, as evidenced by this list of people whose questionable actions made them infamous on the...
Famous People Named Felix 14k VIEWS If your name is Felix, then you're in some great company. Here's our list of the most famous people named Felix, including p...
#3 of 27 The Best Minecraft Streamers On Twitch 787 VOTES Looking for a good Minecraft streamer? We're ranking the best Minecraft streamers on Twitch right now. R...