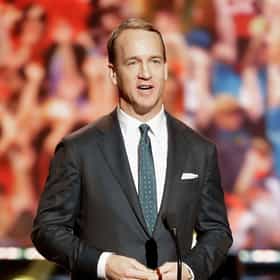 Peyton Williams Manning (born March 24, 1976) is a former American football quarterback who played 18 seasons in the National Football League (NFL), primarily with the Indianapolis Colts. Considered to be one of the greatest quarterbacks of all time due to his numerous career achievements, he spent 14 seasons with the Colts and was a member of the Denver Broncos in his last four seasons. Manning played college football for the University of Tennessee, leading the Tennessee Volunteers to the 1997 SEC Championship in his senior season. He is the second son of former NFL quarterback Archie Manning and older brother of New York Giants quarterback Eli Manning. Manning was selected by the ... more on Wikipedia

Peyton Manning is ranked on...

Peyton Manning is also found on...