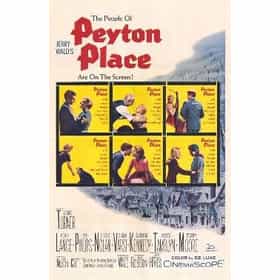 Peyton Place is a 1957 American drama film directed by Mark Robson. The screenplay by John Michael Hayes is based on the bestselling 1956 novel of the same name by Grace Metalious. Peyton Place is an exposé of the lives and loves of the residents of a small New England mill town, in the years surrounding World War II, where scandal, homicide, suicide, incest, and moral hypocrisy hide behind a tranquil façade. The film stars Lana Turner and Hope Lange, with supporting roles by Lee Philips, Lloyd Nolan, and Diane Varsi. ... more on Wikipedia

Peyton Place is ranked on...

Peyton Place is also found on...