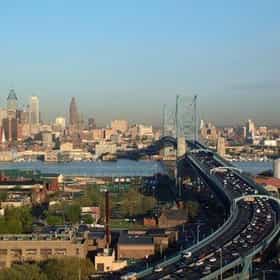 Philadelphia is the largest city in the Commonwealth of Pennsylvania and its only consolidated city-county, the fifth-most-populous city in the United States, and the core of the sixth-largest metropolitan area in the country. Located in the Northeastern United States at the confluence of the Delaware and Schuylkill rivers, Philadelphia is the economic and cultural center of the Delaware Valley. The population of the city was counted at 1,526,006 in 2010 and estimated at 1,560,297 in 2014, according to the United States Census Bureau. The four Pennsylvania counties nearest Philadelphia had an estimated total population of 2,510,793 in 2013; while by 2014 census estimates, the ... more on Wikipedia

The Freakiest Paranormal Legends From Philadelphia, The City Of Brotherly Love 8.5k views Since its beginnings as one of America's first cities, Philadelphia has been one of the nation's most important historical s...
The Best Rappers From Philadelphia 8.8k votes From new artists to some of the greatest hip hop artists of all time, here are the best rappers from Philadelphia. Including...

Philadelphia is ranked on...

Philadelphia is also found on...