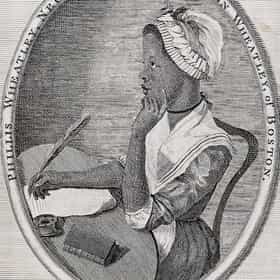 Phillis Wheatley, also spelled Phyllis and Wheatly (c. 1753 – December 5, 1784) was the first African-American woman to publish a book of poetry. Born in West Africa, she was sold into slavery at the age of seven or eight and transported to North America. She was purchased by the Wheatley family of Boston, who taught her to read and write and encouraged her poetry when they saw her talent. The publication of her Poems on Various Subjects, Religious and Moral on September 1, 1773, brought her fame both in England and the American colonies. Figures such as George Washington praised her work. During Wheatley's visit to England with her master's son, African-American poet Jupiter Hammon ... more on Wikipedia

Phillis Wheatley is ranked on...

Phillis Wheatley is also found on...