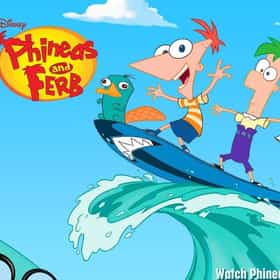 Phineas and Ferb is an American animated comedy-musical television series. Originally broadcast as a one-episode preview on August 17, 2007 and again previewed on September 28, 2007, the series officially premiered on February 1, 2008 on Disney Channel, and follows Phineas Flynn and his English stepbrother Ferb Fletcher on summer vacation. Every day, the boys embark on some grand new project, which annoys their controlling sister, Candace, who frequently tries to reveal their shenanigans to the boys' mother, Linda Flynn-Fletcher, and less frequently to their father, Lawrence Fletcher. The series follows a standard plot system; running gags occur every episode, and the B-Plot almost ... more on Wikipedia

lists about Phineas and Ferb

Phineas and Ferb is ranked on...

Phineas and Ferb is also found on...