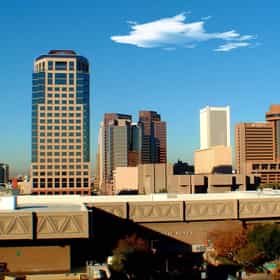 Phoenix is the capital, and largest city, of the state of Arizona. With 1,445,632 people, Phoenix is the most populous state capital in the United States, as well as the sixth most populous city nationwide. The anchor of the Phoenix metropolitan area, it is the 13th largest metro area by population in the United States, with approximately 4.3 million people in 2010. In addition, Phoenix is the county seat of Maricopa County and is one of the largest cities in the United States by land area. Settled in 1867 as an agricultural community near the confluence of the Salt and Gila Rivers, Phoenix incorporated as a city in 1881. Located in the northeastern reaches of the Sonoran Desert, ... more on Wikipedia

The Best Phoenix Albums of All Time 329 votes French rockers Phoenix are known as one of the best indie rock bands. List of the best Phoenix albums, including pictures of...

Phoenix is ranked on...

Phoenix is also found on...

Cleanest Cities in the US List of Diners Drive-ins and Dives Locations by City Bad Road Rage: U.S. Cities With The Worst Road Rage Forbes' Traveller List: 30 Most Visited Cities in US US Cities With Skate Parks & Skate Spots US Cities with the Worst Highway Bottlenecks in America