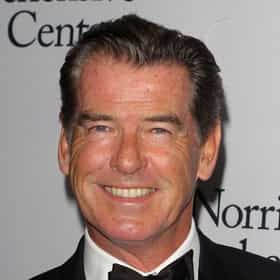 Pierce Brendan Brosnan (; born 16 May 1953) is an Irish–American actor, film producer, activist, architect and environmentalist. Born in Ireland, Brosnan became a naturalised American citizen. After leaving comprehensive school at age 16, Brosnan began training in commercial illustration, then went on to train at the Drama Centre in London for three years. Following a stage acting career he rose to popularity in the television series Remington Steele (1982–1987), which blended the genres of romantic comedy, drama, and detective procedural. After the conclusion of Remington Steele, Brosnan appeared in films such as the Cold War spy film The Fourth Protocol (1987) and the comedy Mrs. ... more on Wikipedia

Pierce Brosnan is ranked on...

Pierce Brosnan is also found on...