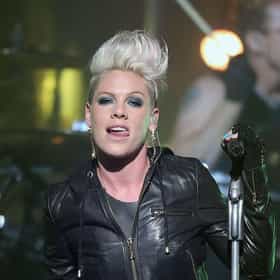 Alecia Beth Moore (born September 8, 1979), known professionally as Pink (stylized as P!nk), is an American singer and songwriter. Originally a member of the girl group Choice in 1995, LaFace Records saw potential in Pink and offered her a solo recording contract. Her R&B-influenced debut studio album Can't Take Me Home (2000) was certified double-platinum in the United States and spawned two Billboard Hot 100 top-ten songs: "There You Go" and "Most Girls". She gained further recognition with the collaborative single "Lady Marmalade" from the Moulin Rouge! soundtrack, which topped many charts worldwide. Refocusing her sound to pop rock with her second ... more on Wikipedia

Amy Lee
P!nk Quotes That Prove She's Even More Amazing Than You Already Knew 1.1k votes Singers and celebrates are often a source of inspiration, but things P!nk has said take it to a whole new level. The singer ...
17 Reasons P!nk Is The Coolest Pop Star In Hollywood 6k votes Alecia Moore, also known as P!nk, is a massive pop star. Ask any fan for P!nk trivia, and they'll tell you that she's won Gr...
A Complete Timeline Of P!nk And Carey Hart's Relationship 6k views Everyone knows P!nk is an awesome rocker, but she's a pretty amazing spouse, too. The relationship between P!nk and her husb...
The Best Pink Albums of All Time 2k votes Considered one of the best pop artists, Pink is also one of the best female singers of all time. List of the best Pink album...
The Best Songs Feat. Pink 107 votes These are the best songs featuring Pink. As a solo artist, Pink has won awards (Grammy Award for Best Female Rock Vocal Perf...
The Evolution Of P!nk's Vibrant Hairstyles Over The Years 7.1k views P!nk has her fair share of fans, and for good reason: the girl can wail, and she can write a catchy hook as well. As the wor...
Pink Loves and Hookups 14.7k views Who is Pink dating? Many famous men have dated Pink, and this list will give you more details about these lucky dudes. Inclu...
Acrobatic, Athletic P!nk Performances That Prove She Could Kick Your Butt 518 votes Forget the Olympics: P!nk performances are the only true measure of the physical potential of the human race. Ever since the...