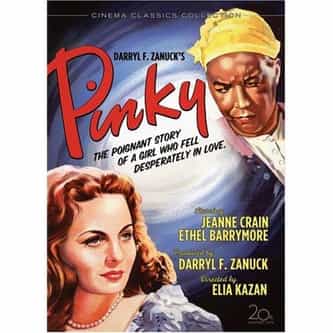 Pinky is a 1949 American drama film starring Jeanne Crain, Ethel Barrymore and Ethel Waters. All three actresses were nominated for the Academy Award, Crain for Best Actress in a Leading Role, and Barrymore and Waters for Best Actress in a Supporting Role. The film was adapted from the Cid Ricketts Sumner novel Quality by Philip Dunne and Dudley Nichols and directed by Elia Kazan. The film is about a light-skinned African-American nursing student, played by Crain, passing for white. Pinky ... more on Wikipedia

Pinky IS LISTED ON