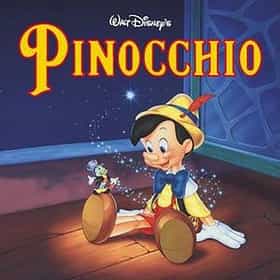 Pinocchio is a 1940 American animated musical fantasy film produced by Walt Disney Productions and based on the Italian children's novel The Adventures of Pinocchio by Carlo Collodi. It was the second animated feature film produced by Disney, made after the success of Snow White and the Seven Dwarfs. The plot of the film involves an old wood-carver named Geppetto who carves a wooden puppet named Pinocchio. The puppet is brought to life by a blue fairy, who informs him that he can become a real boy if he proves himself to be "brave, truthful, and unselfish". Pinocchio's efforts to become a real boy involve encounters with a host of unsavory characters. The film was adapted by ... more on Wikipedia

Pinocchio is ranked on...

Pinocchio is also found on...