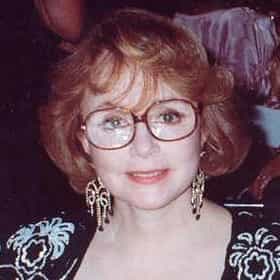 Piper Laurie (born Rosetta Jacobs; January 22, 1932) is an American stage and screen actress known for her roles in the films The Hustler (1961), Carrie (1976), and Children of a Lesser God (1986), all of which brought her Academy Award nominations. She is also known for her performances as Kirsten Arnesen in the original TV production of Days of Wine and Roses, and as Catherine Martell in the cult television series Twin Peaks, for which she won a Golden Globe Award in 1991. In 2018, she appeared in the film White Boy Rick. ... more on Wikipedia

Piper Laurie is ranked on...

#661 of 940 People who voted for Piper Laurie... also upvote Star Trek Franchise on The Greatest Sci-Fi Movies of All Time also upvote Star Trek Franchise on The Best Alien Movies Ever Made The Best Actresses in Film History 1.1M VOTES The best actresses ever are ranked here in this list of the best actresses in film history. These are the greatest actresses...
#390 of 1,041 Celebrity Death Pool 2020 102.3k VOTES They may be beloved performers, award winners, or game changers, but no matter how famous, you can’t escape death. This cele...
#270 of 378 The Best American Actresses Working Today 196.4k VOTES There have been plenty of great American actresses throughout film history, but which female American actresses working toda...
#357 of 862 Celebrity Death Pool 2016 370.1k VOTES Celebrity death pool 2016: Here's a large list of celebrities we think just might die this year. The only certainties in l...
Celebrities You Didn't Know Use Stage Names 1.9M VIEWS List of celebrities with stage names, loosely ranked according to fame and popularity. It's tough to break into show busin...

Piper Laurie is also found on...

how to style your hair like sasuke, best goodfellas quotes, 5 8 in inches, All Football Movies, brat pack movies, It Quotes, best movie writers of all time, fun facts about mushrooms, actors in twister the movie, law and order cast