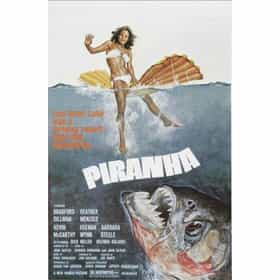 Piranha is a 1978 American B movie about a swarm of killer piranhas. It was directed and co-edited by Joe Dante and starred Bradford Dillman, Heather Menzies, Kevin McCarthy, Keenan Wynn, Barbara Steele, and Dick Miller. Produced by Roger Corman, Piranha is a parody of the 1975 film Jaws, which had been a major success for distributor Universal Studios and director Steven Spielberg, and inspired a series of similarly themed B movies such as Grizzly, Tintorera, Tentacles, Orca, Monster Shark and Great White. Piranha was followed by a sequel, Piranha II: The Spawning, in 1981, and two remakes, one in 1995, and another in 2010, which spawned its own sequel in 2012. ... more on Wikipedia

Piranha is ranked on...

Piranha is also found on...