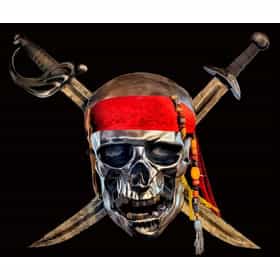 Pirates of the Caribbean Franchise

Pirates of the Caribbean is a series of fantasy swashbuckler films produced by Jerry Bruckheimer and based on Walt Disney's theme park ride of the same name. Directors of the series include Gore Verbinski, Rob Marshall, and Joachim Rønning and Espen Sandberg. The series was scripted by Terry Rossio, Ted Elliott, and Jeff Nathanson, with the stories following the adventures of Captain Jack Sparrow, Captain Barbossa, and Joshamee Gibbs. The films take place in a fictional historical setting; a world ruled largely by an amalgam of alternative versions of the British Empire and the East India Company, with the pirates representing freedom from the ruling powers. The film series ... more on Wikipedia

lists about Pirates of the Caribbean Franchise

Pirates of the Caribbean Franchise is ranked on...

#14 of 119 The Very Best Movie Franchises 305.2k VOTES The best movie franchises of all time have brought us some of the best movies ever as well as some billion dollar films and ...
#7 of 15 15 Wildly Successful Movie Franchises (That Only Have One Great Film) 21.3k VOTES Movie franchises often vary in quality from one movie to the next. Many of them have a few passable movies, but how man...
#9 of 32 The Funniest Comedy Film Franchises of All Time 3.8k VOTES Here are the best comedy film series of all time. Featuring raunchy comedies, parodies, black comedies, and more, the most p...
#39 of 45 The Greatest Action Film Franchises, Ranked 14.7k VOTES Yippee ki-yay, here are the best action movie series. Featuring martial arts movies, action comedies, spy thrillers, and mor...
#4 of 15 The Best Editions of The Game of Life 300 VOTES Life simulation games are a subgenre of videogames but The Game of Life is the original board game version. Now there are se...
#8 of 20 Movie Franchises You Need To Stop Watching 2.3k VOTES Hollywood is a well-oiled machine when it comes to producing expansive cinematic universes and film franchises. Some of the ...
#689 of 748 The Greatest Action Movies of All Time 426.3k VOTES The greatest action movies of all time starring some of the best action stars to have ever fought on screen. The best action...
#2 of 17 The Best Movies for Geminis 1.5k VOTES Here you'll find a list of movies for Geminis that include plots intriguing enough to keep their minds engaged, adventu...
#6 of 15 The Best Movies Directed by Gore Verbinski 349 VOTES List of all movies directed by Gore Verbinski ranked from best to worst with photos. Films directed by Gore Verbinski are li...
The Highest Grossing Movie Franchises of All Time 20.5k VIEWS All the highest grossing movie franchises of all time in one convenient list of the top grossing movie franchises ever. The ...

Pirates of the Caribbean Franchise is also found on...