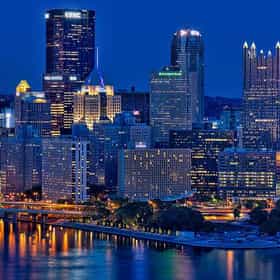 Pittsburgh is the second-largest city in the U.S. state of Pennsylvania with a population of 305,842 and the county seat of Allegheny County. The Combined Statistical Area population of 2,659,937 is the largest in both the Ohio Valley and Appalachia and the 20th-largest in the U.S. Pittsburgh is known as both "the Steel City" for its more than 300 steel-related businesses, as well as "the City of Bridges" for its 446 bridges. The city features 30 skyscrapers, 2 inclines, a pre-revolutionary fortification and the source of the Ohio River at the confluence of the Monongahela and Allegheny Rivers. This vital link of the Atlantic coast and Midwest through the ... more on Wikipedia

10 Brutal Facts About How Horrible Life Was In The Pittsburgh Steel Mills 15.8k views By 1900, the US was the largest producer of steel in the world, and Pittsburgh, PA, was the heart of the industry. So many w...
The Best Rappers From Pittsburgh 2.3k votes From new artists to some of the greatest hip hop artists of all time, here are the best rappers from Pittsburgh. Including b...

Pittsburgh is ranked on...

Pittsburgh is also found on...

List of Diners Drive-ins and Dives Locations by City The Top 10 U.S. Cities With The Most Bookstores