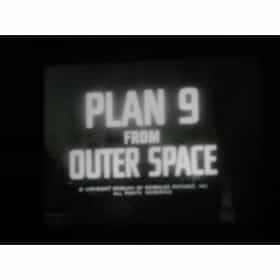 Plan 9 from Outer Space is a 1959 American black-and-white science fiction thriller film released by Distributors Corporation of America. The film was written, produced, directed, and edited by Edward D. Wood, Jr. and stars Gregory Walcott, Mona McKinnon, Tor Johnson, Vampira, and posthumously bills Bela Lugosi as a star. The film tells the story of extraterrestrials who are seeking to stop humanity from creating a doomsday weapon that could destroy the universe. The aliens implement "Plan 9", a scheme to resurrect the Earth's victims. By causing chaos, the aliens hope the crisis will force humanity to listen to them. ... more on Wikipedia

Plan 9 from Outer Space is ranked on...

#236 of 630 The Greatest Guilty Pleasure Movies 199.7k VOTES   What makes a film a guilty pleasure? This is a movie that you love to watch, but won't display on your DVD shelf......
#700 of 1,203 The Absolute Funniest Movies Of All Time 1M VOTES The funniest movies of all time, ranked by fans. What are the funniest movies ever made? From Airplane! to The Jerk to The 4...
#80 of 151 The Best Zombie Movies of All Time 172.1k VOTES List of the best zombie movies ever, including popular blockbusters like Zombieland, 28 Days Later, and Dawn of the Dea...
#41 of 46 The Greatest Classic Sci-Fi Movies 30.8k VOTES Terrifying monsters and unwelcome visitors from space frightened movie-goers in classic sci-fi movies. The best old sci fi m...
#8 of 20 Terrible Movies You Have To See Before You Die 3.8k VOTES Why watch terrible movies? Well, every once in a while, you need a break from the prestige films and quirky indies that perm...
#25 of 161 The Best B Movies of All Time 29.3k VOTES   A list of all the best b-movies ever made, many of which are streaming on Netflix and Amazon Prime. Check out which...
#140 of 199 The Best Space Movies 166.4k VOTES A list of the best space movies. These are the top movies that take place in outer space, and they're all good. What are t...
#27 of 38 The Best Monster Movies of the 1950s 5k VOTES The best horror movies of the 50s are just waiting for you to rank them, so if you're a classic horror geek, then this list ...
#45 of 60 The Best Horror Movies of the 1950s 6k VOTES On this list of the best '50s horror movies, you will find countless genre classics that went on to inspire future generatio...
#44 of 206 The Best Movies of 1959 4.6k VOTES List of the best movies of 1959, with movie trailers when available. Fans of The Three Stooges remember 1959 as the year tha...
#80 of 90 People who voted for Plan 9 from Outer Space... People in the South are 5x more likely to vote for this The Funniest Horror Movies Ever Made 50.6k VOTES There’s nothing better than a ridiculous comedy horror movie. Whether it’s for a date night or just a timekiller, the funnie...
#57 of 72 The Best Sci-Fi Movies of the 1950s 10.1k VOTES On this list of the best 1950s sci-fi movies, you will see a significant crossover between horror and science fiction. The s...
#47 of 47 The Best '50s Thriller Movies 1.6k VOTES The best '50s thriller movies are an interesting mix of films directed by Alfred Hitchcock, films NOT-directed by Hitchcoc...
#53 of 56 The Best Alien Invasion Movies 7.6k VOTES A list of the best alien invasion movies ever made, ranked by movie fans with film trailers when available. This alien invas...
#14 of 23 The Best 1950s Alien Movies 818 VOTES In the 1950s, sci-fi films were made with low budgets and B-movie stars because no one thought that they would ever make a b...
#18 of 36 The Best Campy Horror Movies, Ranked 1.7k VOTES Horror movies can be truly terrifying, but shoddy special effects and poor acting often turn films meant to be terrorizing i...
#18 of 36 The Best Sci-Fi Movies on Amazon Prime 27.5k VOTES The best sci-fi and fantasy movies on Amazon Prime is a complete streaming list for your perusal. All the bes...
#26 of 27 The Greatest Guilty Pleasure Sci-Fi Movies 8k VOTES If you're on the hunt for the best guilty pleasure sci-fi movies, you best prepare for some overdone neon lighting, cor...
#2 of 10 The Best 50s Zombie Movies 91 VOTES Before they were the natural result of the coming apocalypse, zombies were a myth of primitive tribes. On this ranked list o...
Entertainment Weekly's Top 50 Cult Movies 18.7k VIEWS Entertainment Weekly's list of the fifty best cult movies of all time. There's a reason why these are the best cult clas...

Plan 9 from Outer Space is also found on...