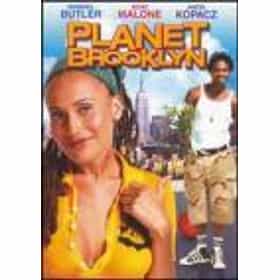 Mad Matthewz makes his feature debut as a writer/director with Men Without Jobs. Ish (Ishmael Butler, formerly of the jazz-influenced ap group Digable Planets) and Oz (Bonz Malone of Slam) are roommates scrounging by in Brooklyn, barely scraping the rent together each month, and ignoring their bills. They spend their days hanging out, smoking, drinking, and playing video games. Ish wants to make it in the music biz, while Oz watches daytime cooking shows and puts his culinary skills to work impressing the grandmother of his young daughter, in hopes that his little girl will eventually come to live with him. Occasionally they visit their favorite record store, where Ish plans to buy

Planet Brooklyn is also found on...