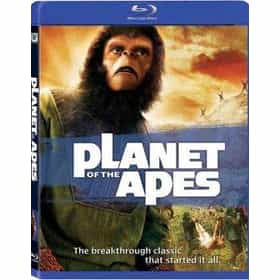 Planet of the Apes is a 1968 American science fiction film directed by Franklin J. Schaffner and starring Charlton Heston. Roddy McDowall, Kim Hunter, Maurice Evans, James Whitmore, and James Daly have co-starring roles in the film. The screenplay by Michael Wilson and Rod Serling was based on the 1963 French novel La Planète des Singes by Pierre Boulle. Jerry Goldsmith composed the groundbreaking avant-garde score. It was the first in a series of five films made between 1968 and 1973, all produced by Arthur P. Jacobs and released by 20th Century Fox. ... more on Wikipedia

Planet of the Apes is ranked on...

#239 of 1,699 The Most Rewatchable Movies 3.4M VOTES There are some movies that I always stop at and watch if I see them on TV or I can put in the DVD player and watch when I'm ...
#124 of 159 The Best Science Fiction Action Movies 93.8k VOTES In space, no one can hear you scream... but everyone else in the movie theater can. If you're searching for a gasp-worthy fl...
#22 of 135 The Scariest Animal Movies Ever Made 37.9k VOTES A list of the scariest animal movies ever made, ranked by the sheer terror you'll feel watching them on the big (or small) s...
#79 of 599 The Greatest Epic Movies Ever Made 286.3k VOTES Need some movie ideas? Check out this list of the best epic films of all time, which encompasses some of the best movie...
#307 of 581 The Greatest Film Scores of All Time 231.7k VOTES This list contains greatest movie themes and scores ever recorded, chosen by the Ranker community. (NOTE: This list is for f...
#1 of 19 If Someone Tells You They've Seen These Sci-Fi Movies, They're Probably Lying To You 50k VOTES Every movie buff lies, at least a little, about the films they've seen. Who has time to see every classic film? Pe...
#146 of 263 Movies That Should Be Made Into Broadway Musicals 21.6k VOTES A list of movies that should be adapted for the Broadway stage. Each year, at least one or two popular Broadway shows are tu...
#141 of 460 The Most Quotable Movies of All Time 133.1k VOTES The most quotable movies of all time certainly rank among the best movies ever, but there's more than just cinematic excelle...
#25 of 43 The Best Adventure Movies That Take Place in the Jungle 2.1k VOTES The jungle is a dangerous place to go looking for an adventure. The best jungle action movies feature characters out of...
#11 of 12 The Most Ripped-Off Horror Movie Twists 777 VOTES While most horror movies end with an ostensibly-happy return to the status quo - the villain defeated, the demon exorcised, ...
#14 of 15 15 Dystopian Movies That Sound Way Better Than America in 2016 245 VOTES Everyone agrees that 2016 was a truly dismal year. A vicious election cycle, senseless outbursts of violence, the death...
#164 of 260 The Best PG-13 Action Movies 54.9k VOTES A list of PG-13 action movies, ranked from best to worst with movie trailers or clips when available. These action movies ar...
#17 of 117 The Best Time Travel Movies 49k VOTES If you're looking for the best time travel movies of all time, look no further. This list contains some great films about ti...
#17 of 108 The Best Apocalyptic And Post-Apocalyptic Movies 31k VOTES We all love a good apocalypse -- as long as it's fictional, of course. Whether you prefer the rip-roaring action of the Max ...
#4 of 133 The Best Movies of 1968 4.7k VOTES List of the best movies of 1968, with movie trailers when available. The year 1968 was a historic year in film, and includ...
#1 of 87 The Best Sci-Fi Movies of the 1960s 6.2k VOTES The 1960s was an important decade in the development of the science fiction genre. Several major releases helped redefine sc...
#86 of 377 The Greatest Suspense Movies 23.8k VOTES A list of all the best suspense movies ever made, many of which are streaming on Netflix and Amazon Prime. Find out if your ...
#3 of 88 The Best Charlton Heston Movies of All Time, Ranked 5.4k VOTES The best Charlton Heston movies of all time prove that he was one of the greatest actors ever along with being one of the mo...
Premiere's The Must-Have Hollywood Movies DVD Collection 20.2k VIEWS Premiere's list of the top DVD's a movie-fan must own. These are movies you need to have in your collection if you consider ...
#12 of 46 The Best '60s Action Movies 1.4k VOTES Are you a fan of action movies? If so, you’ve come to the right place. This list of the greatest 1960s action movies is full...
#3 of 53 The Best G-Rated Science Fiction Movies 571 VOTES List of G-Rated science fiction movies, ranked from best to worst with movie trailers when available. This list takes the be...
#4 of 40 The Best '60s Space Movies 328 VOTES Stepping away from the low-budget camp of '50s sci-fi, '60s space movies show the genre growing up and coming center stage. ...
#1 of 78 The Best Roddy McDowall Movies 1.1k VOTES List of the best Roddy McDowall movies, ranked best to worst with movie trailers when available. Roddy McDowall's highest gr...
#19 of 35 The Best Sci-Fi Movies for 8 Year Old Kids 176 VOTES A lot of science fiction films can get really complicated, sometimes a spectator needs a PhD in Physics in order to understa...

Planet of the Apes is also found on...