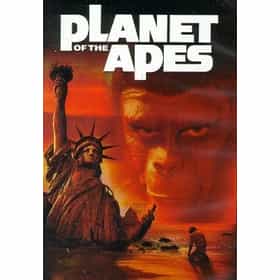 Planet of the Apes is a 2001 American science fiction film directed by Tim Burton and starring Mark Wahlberg, Tim Roth, Helena Bonham Carter, Michael Clarke Duncan, Paul Giamatti, and Estella Warren. The sixth film produced in the Planet of the Apes franchise, it was loosely adapted from Pierre Boulle's 1963 novel of the same name and the 1968 film version. It tells the story of astronaut Leo Davidson mistakenly land on a planet inhabited by intelligent apes. The apes treat humans as slaves, but with the help of an ape named Ari, Leo starts a rebellion. ... more on Wikipedia

Planet of the Apes is ranked on...

Planet of the Apes is also found on...