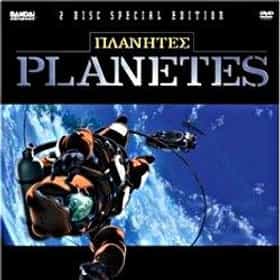 Planetes is a Japanese hard science fiction manga written and illustrated by Makoto Yukimura. It was adapted into a 26-episode anime television series by Sunrise, which was broadcast on NHK from October 2003 through April 2004. The story revolves around the crew of the debris collection craft, Toy Box, in the year 2075. The manga was published in English in North America by Tokyopop, and the anime was distributed in North America by Bandai Entertainment. Both the manga and anime received the Seiun Award for best science fiction series. ... more on Wikipedia

Planetes is ranked on...

#386 of 891 The Best Anime Series of All Time 5.7M VOTES You love anime but what tops this list of the best anime series ever made? Top anime series include shows like Death Note, A...
#277 of 318 The Best English Dubbed Anime of All Time 969k VOTES If you're one of those people who only watches anime in Japanese, we don't blame you. English dubs can really ruin a series ...
#98 of 209 The Best Grown-Up Anime of All Time 551k VOTES For those of you looking for anime that is a bit more mature, like seinen anime, here's a list of the best adult anime ...
#40 of 58 The Best Seinen Anime & Manga Series 54.7k VOTES Here is Ranker's list of the best seinen anime and manga, with help from voters like you. Just so everyone is clear, seinen ...
#13 of 13 13 Anime That Are Better Than the Manga 7.5k VOTES Many anime purists will advise more casual fans to “not say you love the anime if you haven’t read the manga,” &nb...
#50 of 70 The Best Sci-Fi Anime of All Time 62.6k VOTES Sci-fi geeks, we need you now more than ever! This is Ranker's list of the greatest sci-fi anime of all time, and we want ...
#13 of 13 13 Anime That Greatly Differ From The Manga They're Based On 2.9k VOTES Though many anime derive from manga, not every one of those anime follows its source manga closely. When it c...
#15 of 15 15 Great Anime Romances With Grown-Up Couples 8.1k VOTES If you starting watching anime to learn about the intricacies of romance, you might think new relat...
#14 of 15 15 Fantastic Anime About Working At A Job 3.8k VOTES Many people spend more time at work than they do in their own homes. With that in mind, if you're a working adult ...
#19 of 29 The Best Anime Like Ghost in the Shell: Stand Alone Complex 297 VOTES Ghost in the Shell: SAC is one of those series that portrays classic sci-fi anime; a beloved genre that most fans can a...
#10 of 15 15 Extraordinary Anime About Life In Outer Space 1.5k VOTES Most people – with astronauts serving as an exception – spend their who life within the confines of Eart...
#14 of 15 15 Exciting Anime That Explore The World of Science 2.2k VOTES Whether featuring immunology, space travel, genetic engineering, or time travel, science anime is a fascinating genre. Shows...
#7 of 15 15 Anime Fans of Star Wars Will Enjoy 145 VOTES Do you love Star Wars, or know someone who does? If you answered yes, and you also love anime, you may be looking for an ani...
#7 of 44 The Best Anime Like Aria 175 VOTES Need some recommendations for anime like Aria? Since it's such a popular series, let's take a look at the best anime si...
#8 of 31 The Best Anime Like Voices Of A Distant Star 47 VOTES If you've ever been in a long distance relationship, you know how hard it can be knowing your partner is far away; sometimes...
#2 of 34 The Best Anime Like Space Brothers 70 VOTES Sometimes your childhood dreams just don't come true; whether you've just lost interest or life got in the way, there are pl...
#16 of 20 The Best Anime Like Welcome to the N.H.K. 403 VOTES It's time to look at recommendations for anime similar to Welcome to the N.H.K. This series about t...
#13 of 13 The Best Anime Like 'Dr. Stone' 1.4k VOTES Dr. Stone is one of the most popular anime of the Summer 2019 anime season, and for good reason. It's a fascinating sho...