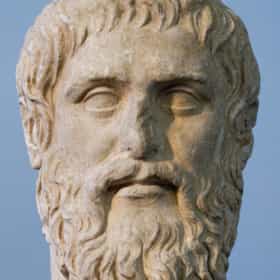 Plato (; PLAY-toe Greek: Πλάτων Plátōn, pronounced [plá.tɔːn] in Classical Attic; 428/427 or 424/423 – 348/347 BC) was an Athenian philosopher during the Classical period in Ancient Greece, founder of the Platonist school of thought, and the Academy, the first institution of higher learning in the Western world. He is widely considered the pivotal figure in the history of Ancient Greek and Western philosophy, along with his teacher, Socrates, and his most famous student, Aristotle. Plato has also often been cited as one of the founders of Western religion and spirituality. The so-called Neoplatonism of philosophers like Plotinus and Porphyry influenced Saint Augustine and ... more on Wikipedia

A List of Famous Plato Quotes 7k votes This list of quotes from Plato features all the best Plato quotes on various subjects, from love to philosophy, and more. ...
The Best Plato Books 277 votes List of the best Plato books, ranked by voracious readers in the Ranker community. With works that have been studied for hun...

Plato is ranked on...

#31 of 928 People We Wish Were Still Alive 3.3M VOTES RIP to our world's greatest achievers, those who changed the way we live and the ways we thought. This list of people we wis...
#9 of 2,831 The Most Influential People of All Time 2.4M VOTES This is a list of the most influential people of all of human history. This means that the individuals on this list have had...
#36 of 379 The Most Important Leaders In World History 943.1k VOTES For good or for bad, our leaders can be powerful forces for change in the world. But who are the most impaction people to ev...
#4 of 1,472 The Greatest Minds of All Time 737.5k VOTES List of the Greatest Minds of All Time, throughout history. This list represents the most influential thinkers across variou...

Plato is also found on...