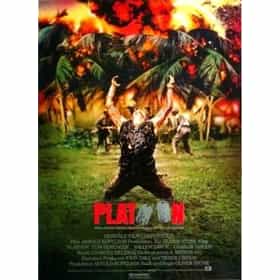 Platoon is a 1986 American war film written and directed by Oliver Stone and starring Tom Berenger, Willem Dafoe and Charlie Sheen. It is the first film of a trilogy of Vietnam War films by Stone. Stone wrote the story based upon his experiences as a U.S. infantryman in Vietnam to counter the vision of the war portrayed in John Wayne's The Green Berets. It was the first Hollywood film to be written and directed by a veteran of the Vietnam War. The film won the Academy Award for Best Picture of 1986. It also won Best Director for Oliver Stone, as well as Best Sound Mixing and Best Film Editing. In 1998, the American Film Institute placed Platoon at #83 in their "AFI's 100 Years... ... more on Wikipedia

The Most Memorable Quotes From 'Platoon' 138 votes The best Platoon quotes show why it is such a great movie even if you haven't seen it in a while. Platoon holds a special si...

Platoon is ranked on...

Platoon is also found on...

Every Oscar Winning Film Ever List of All Indie Movies