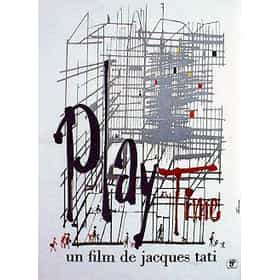 Playtime is French director Jacques Tati's fourth major film, and generally considered to be his most daring film. It was shot from 1964 through 1967 and released in 1967. In Playtime, Tati again plays Monsieur Hulot, a character who had appeared in some of his earlier films, including Mon Oncle and Les Vacances de Monsieur Hulot. As mentioned on the production documentary that accompanies the Criterion Collections DVD of the film, by 1964 Tati had grown ambivalent towards playing Hulot as a recurring central role. Unable to dispense with the popular character altogether, Hulot appears intermittently in Playtime, alternating between central and supporting roles. Shot in 70 mm, Playtime ... more on Wikipedia

Playtime is ranked on...

#932 of 1,203 The Absolute Funniest Movies Of All Time 1M VOTES The funniest movies of all time, ranked by fans. What are the funniest movies ever made? From Airplane! to The Jerk to The 4...
#145 of 194 The Best Movies of the '60s 51.7k VOTES The 1960s were a great period for film. Some of the best and most memorable movies in film history were made during this tim...
#11 of 48 The Best French Comedy Movies 1k VOTES The French aren't usually known for their sense of humor, but this list of the best French comedy movies proves that the Fre...
#7 of 15 The Best Comedy Movies Set in Paris 54 VOTES Because it's such a fun and glamorous city, comedy movies based in Paris offer a lot of enjoyment. It's often entertain...
#2 of 11 The Best Jacques Tati Movies 78 VOTES List of the best Jacques Tati movies, ranked best to worst with movie trailers when available. Jacques Tati's highest grossi...

Playtime is also found on...