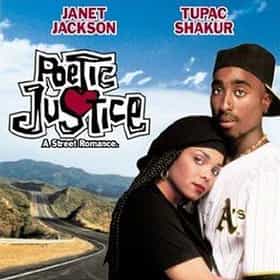 Poetic Justice is a 1993 drama/romance film starring Janet Jackson and Tupac Shakur with Regina King and Joe Torry. It was written and directed by John Singleton. The main character, Justice, writes beautiful poems which she recites throughout the movie. The poems are in fact by Maya Angelou. Angelou also appears in the movie as one of the three elderly sisters, May, June and April whom the characters meet at a roadside family reunion. The Last Poets make an appearance toward the end of the film. Poetic Justice reached #1 in the box office its opening weekend, grossing $11,728,455. It eventually grossed a total of $27,515,786. Jackson received nominations for the Academy Award and ... more on Wikipedia

15 Things You Didn’t Know About The Film ‘Poetic Justice’ 2.8k views John Singleton's 1993 cult classic Poetic Justice was the follow-up to the insanely successful Boyz N The Hood. And while th...

Poetic Justice is ranked on...

Poetic Justice is also found on...