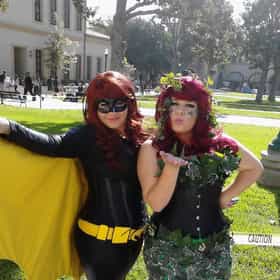 Poison Ivy is a fictional DC Comics supervillainess who is primarily an enemy of Batman. Created by Robert Kanigher and Sheldon Moldoff, she made her first appearance in Batman #181. Poison Ivy is depicted as one of the world's most prominent eco-terrorists. She is obsessed with plants, botany, and environmentalism. She uses toxins from plants and mind controlling pheromones for her criminal activities, which are usually aimed at protecting the natural environment. Fellow villain Harley Quinn became her recurring partner-in-crime and her best friend. She has proven to be one of Batman's more powerful foes, being one of the few members of the Dark Knight's Rogues Gallery to display ... more on Wikipedia

Poison Ivy is ranked on...

#24 of 660 People who voted for Poison Ivy... also upvote Dark Knight Franchise on The Best Superhero Movies Ever Made also upvote Batman on The Best Comic Book Superheroes of All Time The Best Comic Book Villains 270.1k VOTES Who are the best comic book villains of all time? This list of top supervillains in comics includes some of the most notorio...
#160 of 961 People who voted for Poison Ivy... People on the West Coast are 2x more likely to vote for this The Greatest Movie Villains of All Time 1.2M VOTES While some of us tend to despise movie villains, plenty of movie-goers favor some of these antagonists. Whether that's ...
#15 of 176 The Greatest Villains in DC Comics, Ranked 88.9k VOTES Here are the best DC villains ranked best to worst by comic book fans. These popular bad guys in DC Comics are the best...
#7 of 643 People who voted for Poison Ivy... People in the Midwest are 2x more likely to vote for this also upvote Wonder Woman on The Best Comic Book Superheroes of All Time The Best Female Comic Book Characters 279.9k VOTES List of the best female comic book characters, be they superhero or villain. These are the women characters comic book enthu...
#2 of 29 The Most Stunning Female DC Comics Supervillains 55.8k VOTES There's just something about bad girls. The rush of a girl who can kick your butt is something special, too. When you combin...
#59 of 141 The Hottest Video Game Vixens of All Time 154.8k VOTES Hot female video game characters have been fueling gamers buying habits for decades now. From 8 Bit Sprite hotties, to the s...
#17 of 44 Fictional Characters You'd Leave Your Woman For 56.5k VOTES She’s the woman of your dreams and she just killed a dude with a bow and arrow. She’s totally not real but if you were facin...
#10 of 15 The Most Shockingly Violent Things Batman Villains Have Ever Done 14.4k VOTES A hero is only as good as his villains, and thankfully Batman has the absolute best selection of rogues of any DC hero....
#6 of 97 People who voted for Poison Ivy... also upvote Alien Franchise on The Greatest Sci-Fi Movies of All Time The Best Characters from Batman Comics 119.4k VOTES The DC Universe has some great characters in it, but perhaps Gotham City has some of the best. Being non-superpowered, Batma...
#2 of 24 The 25 Hottest Batman Villains Ever 9.4k VOTES DC Comics has perfected the craft of creating intriguing female villains, arguably because their outlaws are often easy on t...
#12 of 25 Plus Size Cosplay Costume Ideas 17.2k VOTES If you've ever been to a comic book convention (like the wildly popular Comic-Con in San Diego), you've probably seen the ho...
#2 of 11 12 Female Comics Characters Who Are Smarter Than You 5.7k VOTES There are plenty of genius female characters in comic books. You just don't hear about them as often because comics are pr...
All of Batman's Deadliest Villains & Enemies, Listed 920.2k VIEWS List of all Batman villains and enemies found on this Batman villains list. This list contains all super villains Batman has...
All DC Villains & DC Comics Enemies 402k VIEWS DC villains list is a huge list of all the villains from DC Comics. Supervillains make life miserable for the heroes and m...
#18 of 23 The Best Characters On 'Gotham' 4k VOTES We're ranking the best characters on Gotham. The hit superhero show centers on a young Commissioner Gordon (played by Ben Mc...
7 Comic Book Characters Who Unfortunately Were Cut From Movies 7.5k VIEWS How many times has this happened to you? You buy a ticket to see the movie adaptation of your favorite comic book only to le...
What Your Favorite Batman Villain Says About You 856 VIEWS Batman’s rogues' gallery is unlike any other. His well of crazy, color-coordinating villains runs deep; there are ...
Sexiest Comic Book Heroes 18.5k VIEWS These comic book heroes are quite the lookers on this list, being easy on the eyes for all readers, male and female alike. T...