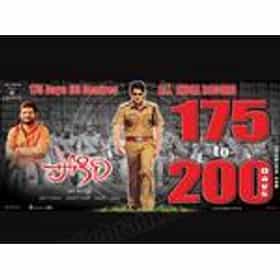 Pokiri is a 2006 Telugu, gangster-thriller film written and directed by Puri Jagannadh starring Mahesh Babu and Ileana D'Cruz in the lead roles and Prakash Raj, Sayaji Shinde and Ashish Vidyarthi in supporting roles. The film is a joint production between Puri Jagannadh's Vaishno Academy and Manjula Ghattamaneni's Indira Productions. The film was released on 28 April 2006. Upon release, the film received critical acclaim from critics and emerged as a Blockbuster. With the film's impact on commercial cinema, it was remade in multiple languages such as, in Tamil as Pokkiri directed by Prabhu Deva, Hindi as Wanted, in Kannada as Porki and also dubbed into Hindi as Tapoori Wanted. The film ... more on Wikipedia

Pokiri is ranked on...

Pokiri is also found on...