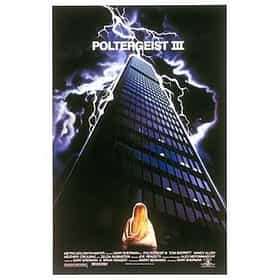 Poltergeist III is a 1988 American horror film. It is the third and final entry in the Poltergeist film series. Writers Michael Grais and Mark Victor, who wrote the screenplay for the first two films, did not return for this second sequel; it was co-written, executive produced and directed by Gary Sherman, and was released on June 10, 1988, by Metro-Goldwyn-Mayer Pictures. The film was panned by critics, and was a box office disappointment. Heather O'Rourke and Zelda Rubinstein were the only original cast members to return. O'Rourke died four months before the film was released and before post-production could be completed. It was dedicated to her memory. ... more on Wikipedia

Poltergeist III is ranked on...

#389 of 816 The Best Horror Movies Of All Time 1.1M VOTES Horror movies, ranked by adrenaline junkies worldwide. Anyone can vote on this CrowdRanked list, and can even add your own f...
#99 of 107 The Best Third Films In A Movie Series 28.2k VOTES Threequel: the third (and often final) movie in a series. A third film that follows the original and the sequel. With the ne...
#60 of 217 The Best PG-13 Horror Movies 28.3k VOTES You've found the only list you'll ever need when it comes to PG-13 horror movies that are ranked from best to wors...
#308 of 506 The Scariest Movies Ever Made 549.8k VOTES These are the all-time scariest movies ever made. Many of these movies have become part of the pop culture lexicon due to th...
#103 of 234 The Best R-Rated Horror Movies 8.4k VOTES List of R-Rated horror movies, ranked from best to worst with movie trailers when available. This list takes the best R-Rate...
#4 of 4 The Scariest Movies In The 'Poltergeist' Franchise 39 VOTES These are the best Poltergeist movies the franchise has to offer. The spirits in the Poltergeist movies have ...
#24 of 72 The Best Tom Skerritt Movies 1.2k VOTES List of the best Tom Skerritt movies, ranked best to worst with movie trailers when available. Tom Skerritt's highest grossi...

Poltergeist III is also found on...