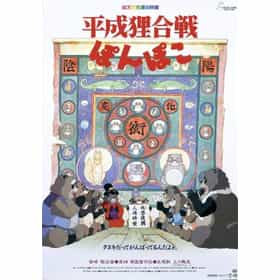 Pom Poko is a 1994 Japanese animated fantasy film, the eighth written and directed by Isao Takahata and animated by Studio Ghibli. Consistent with Japanese folklore, the tanuki are portrayed as a highly sociable, mischievous species, which are able to use "illusion science" to transform into almost anything, but too fun-loving and too fond of tasty treats to be a real threat – unlike the kitsune and other shape-shifters. Visually, the tanuki in this film are depicted in three ways at various times: as realistic animals, as anthropomorphic animals which occasionally wear clothes, and as cartoony figures based on the manga of Shigeru Sugiura. They tend to assume their realistic ... more on Wikipedia

Pom Poko is ranked on...

Pom Poko is also found on...