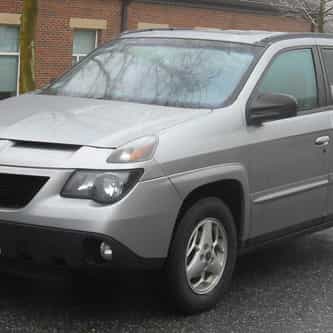 The Pontiac Aztek is a mid-size crossover marketed by Pontiac from the 2001 model year to the 2005 model year along with its corporate cousin, the Buick Rendezvous. As a four-door crossover with a front engine and four-wheel drive, the Aztek featured a four-speed automatic transmission with a V-6 engine. Marketed by Pontiac as a "sport recreational vehicle," The Aztek used a shortened platform shared with GM's minivans featuring 94 cubic feet of cargo room capable of carrying a ... more on Wikipedia

Pontiac Aztek IS LISTED ON

#1 of 59
250.4k VOTES The Ugliest Cars In The World
#20 of 20
2k VOTES The Best Recreational Cars and SUVs
#5 of 30
592 VOTES Find The Perfect Getaway With The Best Cars For Camping
Full List of Pontiac Models Full List of General Motors Models