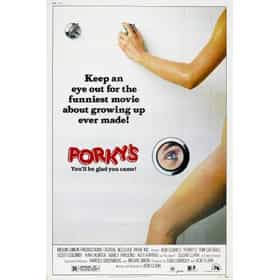 Porky's is a 1981 Canadian-American comedy film about the escapades of teenagers at the fictional Angel Beach High School in Florida in 1954. Released in the United States in 1982 with an R rating, the film spawned three sequels: Porky's II: The Next Day, Porky's Revenge!, and Pimpin' Pee Wee, and influenced many writers in the teen film genre. Despite generally negative critical reception, Porky's was a box office success. It was the fifth highest-grossing film of 1982. ... more on Wikipedia

Porky's is also found on...