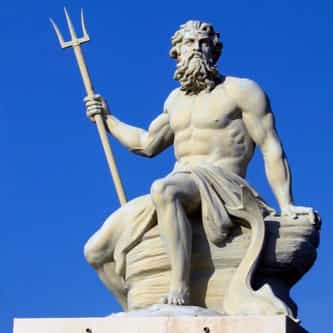 Poseidon is one of the twelve Olympian deities of the pantheon in Greek mythology. His main domain is the ocean, and he is called the "God of the Sea". Additionally, he is referred to as "Earth-Shaker" due to his role in causing earthquakes, and has been called the "tamer of horses". He is usually depicted as an older male with curly hair and beard. The name of the sea-god Nethuns in Etruscan was adopted in Latin for Neptune in Roman mythology; both were sea ... more on Wikipedia

Poseidon IS LISTED ON

242.5k VIEWS Which Greek God Are You, According To Your Zodiac Sign?
#2 of 14
5.4k VOTES All The Greek Gods on Mount Olympus
List of Clash Of The Titans Characters