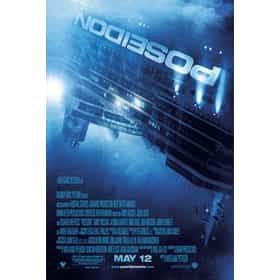 Poseidon is a 2006 disaster film directed and co-produced by Wolfgang Petersen. It is the third film adaptation of Paul Gallico's novel The Poseidon Adventure, and a loose remake of the 1972 film of the same name. It stars Josh Lucas, Kurt Russell and Richard Dreyfuss. It was produced and distributed by Warner Bros. in association with Virtual Studios. The film had a simultaneous release in the IMAX format. It was released on May 12, 2006, and nominated at the 79th Academy Awards for Best Visual Effects. Poseidon grossed $181,674,817 at the worldwide box office on a budget of $160 million. ... more on Wikipedia

Poseidon is ranked on...

Poseidon is also found on...