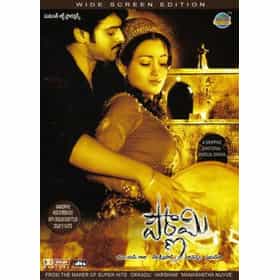 Pournami is a 2006 Telugu language film directed by choreographer-turned director Prabhu Deva. It stars Trisha, Prabhas, Charmy, Rahul Dev, and Sindhu Tolani. The movie had a lot of pre-release hype because of Prabhas and Trisha's earlier hit, Varsham. However, despite the huge cast, the film's performance at the box office was a commercial failure. The film has been dubbed into Tamil as Pournami and in Hindi as Tridev - Pyaar Ki Jung. The film was inspired from the 2001 Brazilian film Behind the Sun starring Rodrigo Santoro which in itself was adapted from an Albanian novel by Ismail Kadare. ... more on Wikipedia

Pournami is ranked on...

Pournami is also found on...