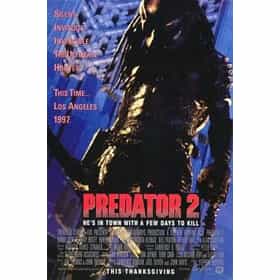 Predator 2 is a 1990 American science fiction action horror film written by Jim and John Thomas, directed by Stephen Hopkins, and starring Danny Glover and Kevin Peter Hall. The film is a sequel to the 1987's Predator, with Kevin Peter Hall again playing the role of the Predator. Despite receiving negative reviews, the film gained a moderate return at the box office though it was considered a disappointment compared to the previous film's $98 million gross to a $15 million production budget. ... more on Wikipedia

Predator 2 is also found on...