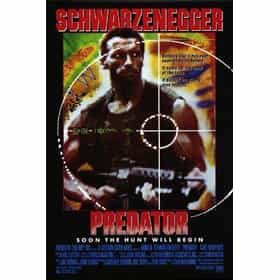 The Predator film series is a science fiction horror film franchise based on a race of fictional extraterrestrials created by Jim Thomas and John Thomas. Produced by 20th Century Fox, the series started in 1987 with the film Predator, which led to two sequels and novel, comic book and video game spin-offs. Related to the franchise are the Alien vs. Predator films, which combine the titular Predator with the creatures from the Alien film series. ... more on Wikipedia

The Best Predator Movies 126 votes There is no doubt that all these movies are classics or at least memorable but one of them has to be the best of the Predato...

Predator Franchise is ranked on...

#60 of 112 The Very Best Movie Franchises 313.5k VOTES The best movie franchises of all time have brought us some of the best movies ever as well as some billion dollar films and ...
#18 of 45 The Greatest Action Film Franchises, Ranked 15.5k VOTES Yippee ki-yay, here are the best action movie series. Featuring martial arts movies, action comedies, spy thrillers, and mor...
#22 of 128 The Best Horror Movie Franchises 113.1k VOTES What are the best horror movie franchises? Certainly, some of the biggest factors in determining a great horror movie series...
#43 of 75 Which Ensemble Films Should Be Remade With All-Female Casts? 3.1k VOTES When it comes to ensemble films, male-dominated casts have certainly had their fair share of the spotlight. From a...