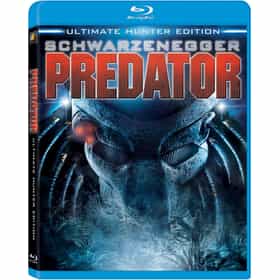 Predator is a 1987 American science fiction action film directed by John McTiernan and was distributed by 20th Century Fox. It stars Arnold Schwarzenegger, Carl Weathers, Elpidia Carrillo, Bill Duke, Jesse Ventura and Kevin Peter Hall. The story follows an elite team, on a mission to rescue hostages from guerrilla territory in Central America. Unbeknownst to the group, they are being stalked and hunted by a technologically advanced form of extraterrestrial life, the Predator. Predator was written by Jim and John Thomas in 1985, under the working title of Hunter. Filming began in April 1986 and creature effects were devised by Stan Winston. ... more on Wikipedia

Somehow, Making Predator Was WAY More Insane Than The Actual Movie 770k views At some point in '85 or '86, producer Joel Silver was asked to come aboard a project developed from a mysterious script abou...

Predator is ranked on...

Predator is also found on...